Kalinga, ancient territorial subdivision of east-central India. It corresponds to present-day northern Telangana, northeastern Andhra Pradesh, most of Odisha, and a portion of Madhya Pradesh states.

Strictly, Kalinga stretched no farther south than the Godavari River, thus excluding Vengi (the territory between that river and the Krishna River).

The hinterland of the region led through mountainous and thickly forested country, inhabited by semi-Hinduized tribes, to central India and the Indo-Gangetic Plain to the north. 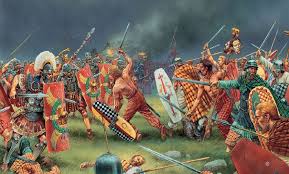 With the ports of Kakinada, Visakhapatnam, and Srikakulam (Chicacole) and the important cities of Rajahmundry and Vizianagaram—all now in Andhra Pradesh—Kalinga conducted a rich seaborne trade with Burma (now Myanmar) and areas still farther south and east. It was mentioned by the Roman writer Pliny the Elder.

Kalinga was conquered by Mahapadma, the founder of the Nanda dynasty (c. 343–c. 321 BCE) of Magadha.

It seceded from the Magadhan empire sometime after the fall of the Nanda dynasty, but it was reconquered by the Mauryan king Ashoka in the 3rd century BCE in a terrible war that was said to have helped to convert him to Buddhism.

Subsequently, the Somavamshis of southern Kosala, who controlled the strategic town of Chakrakotta (in what is now southern Chhattisgarh), ruled parts of the coastal strip for a period of time, as did the Yayatis, Vishnukundins, Bhanjas, and Bhauma Karas.

The Eastern Gangas were the most famous rulers of all Kalinga. Their dynasty, which began its rule in the mid-11th century CE, sometimes competed with and sometimes allied itself with the Eastern Chalukyas of Vengi.

In the next century, Anantavarman Chodnagagadeva was particularly renowned; he built the temple of Jagannatha at Puri (now in eastern Odisha). 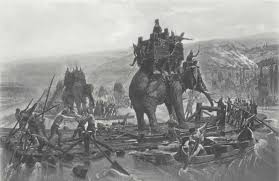 That temple came under the protection of the Eastern Gangas, and the god was treated as their landlord. The famous temple of the sun god at Konark was built in the 13th century by Narasimha I. Between 1238 and 1305 the Eastern Gangas successfully withstood Muslim infiltration from the north, but the dynasty collapsed when the sultan of Delhi penetrated Kalinga from the south in 1324.